I get it: you’re frustrated because, while you really want to know how to attract men, the truth is that you do attract them…only they’re the guys you don’t want.

You get the point. You probably have no problem attracting certain types of guys…but you’re here because the guys you do want might not be pursuing you.

It’s frustrating to be sure. But not to worry, you Sexy Confident Lady, because I’m here to give you tips on how to attract men…the ones you do want to attract!

P.S. Flirting is a huge part of learning how to attract men. Get proven techniques that thousands of women have already successfully used in my Flirting Workshop.

Introduction to How to Attract Men

I’ve gotta say: the internet is full of a lot of crappy advice when it comes to teaching you ladies how to attract men. I’ve read articles telling women to wear revealing clothing…

To bat their eyelashes…

Basically, degrade themselves to make men find them attractive.

I’m here to tell you that’s bullsh#% advice. You don’t need to be some fake sexpot version of yourself to attract men.

In the past year, I’ve hired a researcher here at Sexy Confidence because I wanted to combine cold, hard scientific fact with my extensive experience as a dating coach — with a dash of basic common sense — to help you ladies attract love.

So let’s use that powerful mix of my experience, data, and common sense and find out how you can attract men.

Did you know that there’s one personality trait that is crazy important in a relationship? Yep. You guess it. It’s kindness.

In a research study put on by David M. Buss from the University of Texas at Austin, it was found that, worldwide, kindness was one of the traits most desired in a mate by both men and women. Here’s what the study said:

“Kindness is linked with a cooperative disposition, interest in long-term relationships, ability to form social alliances, and empathy in rearing children.”

So even if you aren’t looking for long-term or having kids with a guy, know that kindness can go a long way. How can you be kind and attract the right man?

Now, before you women who are over 40 roll your eyes and skip this one, notice that I didn’t say youth. I said youthfulness.

The definition of youthfulness is: behavior or appearance characteristic of young people.

Most people think this has to do with age, but I think youthfulness has more to do with attitude.

I know some women who are 60 years old who are youthful: they love to be social, spontaneous, and exciting.

I know some women who are 22 years old who are old and lame, boring, and too serious. So as they say: age ain’t nothing but a number.

A lot of women assume men want younger women, but that’s not necessarily the case. (And if a guy you’re interested in only wants a younger woman, he’s not for you anyway. You need a man who looks to who you are, not how old you are.)

So…how can you exude youthfulness as you work on how to attract men?

If you want to know how to attract men, know your worth and own it.

I think there’s a lot of confusion about what confidence in dating looks like. Confidence doesn’t mean you walk up to every guy you’re drawn to, you ask him out, and you initiate the first kiss. This is what I consider masculine confidence, and while there’s nothing wrong with it, I want you to work on creating feminine confidence. Sexy Confidence.

What does that look like? It means knowing that you deserve a relationship, and being proud of what you bring to the table.

A woman with high self-worth sets standards for herself. She doesn’t settle. If a man doesn’t meet your standards, wave him on and say, “NEXT!”

Here’s how to own your value and use it in your strategy on how to attract men:

Up until now, we’ve focused on how to attract men through personality traits, but I would be doing you a disservice to not talk about that physical attraction as well. A woman’s figure obviously plays a large role in attraction. I’d be lying to you if I said it wasn’t.

That hourglass figure is one that men instinctively respond to positively.

Researchers have found that men are highly attracted to women with a waist-to-hip ratio of .7 — that’s the classic hourglass figure.

An eye-tracking study last year found that men start to evaluate a woman’s hourglass shape within the first 200 milliseconds of seeing them. So, yea, you could say that first impressions are important!

Certainly not every woman has an hourglass shape, and that’s OK. The important thing when it comes to being physically appealing to the opposite sex is being confident in what your body looks like. Here are a few other tips:

Researchers who study speed dating events — where men and women basically make decisions in mere minutes about whether they’re attracted to someone or not — found that simply showing interest can build attraction.

So if you want to express that you’re interested in a man, pay attention to him. Give him 100%. He’ll get excited and bring his A game. On the other hand, if you don’t really seem interested, he’s going to assume that’s the case, and he’ll move on.

Here’s how to let him know you’re interested without going overboard:

You don’t have to be a rocket scientist to get that a positive attitude is attractive. Clearly, being negative has never gotten you very far in life or love.

Men are attracted to pleasant, positive, and overall cheerful women. You’re probably attracted to men with those same characteristics. Am I right?

I can personally attest to this. I’ve gone out on many dates in my life, and it’s true: there are women who just talk badly about other people or who are otherwise negative. But when I met Jess, she was so remarkably different. She saw the world through these rose-colored lenses and was so positive about everything. Her personality was completely magnetic to me as a result.

How can you let your positive attitude shine?

It’s not like you needed another reason to be honest (you should be anyway, not just to attract a man), but research finds that people who are considered honest come off as more fit, healthy, and kind.

Now, I’ve gotta say: in the dating world, I have known a lot of men and women who lie. I really don’t understand why. If you’re hoping to build something with a guy, wouldn’t he find out your lie down the road anyway? Why not tell the truth from the start?

After all, honesty is sexy.

This is one of the easiest ways to improve your appearance and succeed in how to attract men. It’s like an instant upgrade.

In a lot of my advanced dating courses, I talk about what I call smalking: smiling while talking. Some people have trouble with this (I used to), but it’s something you can practice any time you’re talking and you’ll get better at smalking.

It’s amazing how well men perceive you when you smile more. Smiling indicates happiness and ease. Here’s how to put more smiles in your dating game.

#9. Playing with Your Hair

Way back when I used to coach men on how to meet you Sexy Single ladies, I told them to look for women who were playing with or combing their hair because it (consciously or subconsciously) communicated, “Hey, I’m interested in you.”

It’s something both sexes do, though men usually touch their faces when they’re interested. So pay attention the next time you’re flirting with a man to see if he rubs his five o’clock shadow. If he does, you’re successful in learning how to attract men!

Have you ever met someone and within three seconds of meeting them, you thought, “Yikes, I’m not interested.”

But then with other people, you meet them and immediately think, “Wow, I like this person. He’s great.”

What that comes down to is your body language. Your vibe. The energy you bring to the table. When you’re energetic and charismatic, you can’t help but draw people to you (men and women alike; energy isn’t about sexuality.).

Last but not least on the list of how to attract men: your most appealing asset: your brain!

On the other hand, dumb, insecure men are intimidated by smart women.

Sadly, most men you’ll meet are going to be dumb and insecure. It’s become epidemic! Smart women aren’t able to find intelligent men to impregnate them in Europe, according to the European Society of Human Reproduction and Embryology conference in Geneva, so they’re freezing their eggs until men of suitable intelligence show up.

But I don’t want you to change your ways to suit the men you meet. Don’t dumb yourself down. If you’re talking to a man who, well, couldn’t take you in a Words With Friends game, be humble. Don’t brag about your intelligence. Don’t belittle him or anyone else…but at the same time, don’t be afraid to show your intellectual side. The right man will be thrilled by your brain.

When it comes to how to attract men, there are clearly a lot of paths to success. Choose the strategies above that you’re most comfortable with. Above all, your approach should be natural, not forced.

Attracting men is just the first step. From there, you’ve got to weed out the winners and figure out who you’re most interested in pursuing something with. But that initial flirting and attraction will lay the foundation for a potential relationship, so put in the work now for reward later!

Let’s start a conversation in the comments. What strategies have you found most successful in attracting men?

How to attract men? Step up your flirting game. The Flirting Workshop is designed to help you captivate the attention of any man in the room. Sign up today! 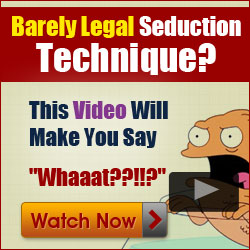